Having been hanging round with various writerly types for over 10 years now, I’ve heard my fair share of stories about book covers going wrong, or it taking an absolute age to find a design which both author and publisher are happy with. I think it’s fair to say that working with Manifold Press on the cover design for Under Leaden Skies has been completely and utterly opposite from what I had prepared myself to expect!

For a start, there was no form. Yay! (I hate forms)

Instead, there was simply a note on the acceptance email saying that if I had any thoughts about cover design, it was best to voice them as soon as possible so they could get started. Somewhat timidly – especially since at that point in time I knew the Manifold Press covers were changing from their previous style to a new one, but the new style hadn’t yet been revealed – I replied that, as aircraft and flying are so important to Teddy Garston, I would very much like to have on the cover one of the aircraft mentioned in the book: “Ideally a Sunderland flying boat, but as it may be harder to source an appropriate image, I’d be happy with a Mosquito”

Well. Within 48 hours I had a reply back with a link to a possible *gorgeous* image of a Sunderland flying over the Devon coastline. We went back & to a few times, until the head of the art department stepped in and politely pointed out that all these images were photographs, and the new guidelines are that historical fiction should use painted images.

After a few evenings spent on image searches, I emailed links to my two favourite images, with a brief explanation of what it was I liked about them, and a few weeks later I received an email with the first draft of the cover: 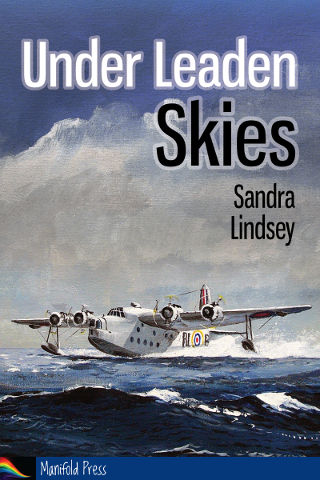 We didn’t bother with a second draft.