There’s different types of dangerous books. We’ve all heard tales about books which are directly dangerous to your health: either the arcane knowledge they contain will drive you mad, cause you to become possessed, or some other terrible fate – possibly ending with the book reading you rather than the other way around! These kind of tomes (they nearly always are tomes) generally exist only in myth, legend, and Terry Pratchett books. Phew!

Politically dangerous books, on the other hand, may be more indirectly responsible for one’s injury or imprisonment – it’s not the book itself which causes problems, but fear of its power. This danger is very much more real, provable, and unfortunately present in the world than the sort above. Since others are able to speak on this topic with far greater authority and expertise than I can, however, I will leave that to them, and instead veer into the more light-hearted territory of books which are dangerous to your financial well-being.

I seem to be reading a number of this type of book recently. Some, such as The Anthology of English Folk Tales, I very much expected to find myself adding further volumes to wishlists and working out how many I could afford to buy, and when. This particular book is one of a set published by The History Press in association with the Society for Storytelling, and if I won the lottery I’d buy them all tomorrow. They’re absolutely beautiful as well as being packed full of brilliant tales.

Another book which led to further purchases is The Jane Austen Writer’s Club, which is a delightful volume of advice and exercises for developing your story and character ideas into viable novels. It wouldn’t be the first time that a writing advice book has led to a lengthening of my wishlist, but you’ll laugh when I tell you that the book I bought because of this one is Six Dinner Sid. I highly recommend both books, in case you’re wondering, and if I’d known the story of Six Dinner Sid before Rascal moved into our lives, he might have been given a different name! 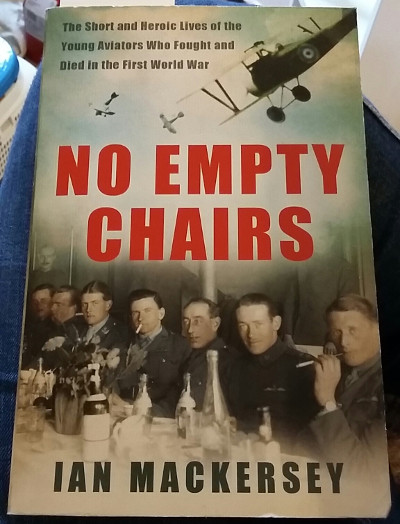 The book which really seems determined to tear through my self-imposed restraint in book buying, however, is one I didn’t even notice until my husband picked it up and said, “This looks like a Sandra book. It might breed bunnies* though.”

You may already have seen me posting about this book on Facebook and Twitter: Ian Mackersey’s No Empty Chairs, about the UK’s Royal Flying Corps in World War 1. By the end of Chapter 2, I had added 3 books to various wishlists, bought one other as an ebook, and had pretty well decided to buy a 2nd hand copy of another around the end of the week. I’ve just finished Chapter 6 and the desire to read as many of the author’s sources as possible hasn’t abated. There’s another 25 chapters, plus an epilogue, to go before I finish the book. I may need to find some extra will-power from somewhere…

*Yes, he knows about plot bunnies and how viciously they breed. Isn’t he awesome :-)