“A View across the Valley: Short Stories by Women from Wales c. 1850-1950” was one of the first Honno books I added to my wishlist after attending their 30th birthday celebration last September. One of the speakers, talking about the diversity of the Honno Classics series, spoke quite movingly about compiling this anthology: discovering Welsh womens’ writing in old publications, tracking down copyright holders and gaining permission. In particular, she spoke about trying to trace Dilys Rowe, author of the final story which gives its title to the anthology, was first published in 1955 and, like many of the works included in this anthology, had not remained in print. Finally she managed to track down someone who was related to a Dilys Rowe who, it seemed, could be the author they were searching for, and sent off a letter for Dilys Rowe (or her heirs) with a covering letter explaining who Honno are and why they were trying to find Dilys. At this point, they didn’t know if Dilys Rowe was still alive or dead…

Then, at some point, the office received an unexpected phone call from France. It was Dilys Rowe! The letter had reached her, and she was overwhelmed that someone was interested in her story after all this time, and that they thought it still had relevance nearly 50 years later (the anthology was first published in 1999) – and then she launched into speaking about how the story had come about, partly from personal experience as a young woman in Wales.

It was a marvellous tale of how the anthology came into being, rich with detail and Honno’s passion for storytelling and championing of Welsh women authors shining through. As I’ve said before: if you have an opportunity to meet the ladies of Honno, do. They really are dedicated to sharing the highest quality tales they can. And I heard last night that they’ve secured funding for another three years – yay!

Back to the anthology…

It is a fantastic read, but it’s not a light one. There is death, suffering and – well, not much angst, more resignation that “this is how things are, we can’t change it.” Even in the lighter tales with what could be classed as a happy ending, the women don’t get much choice in their lives.

Some stories are heartwrenching. “Home Sweet Home” by Allen Raine was particularly so for me, and really brought home the importance of literacy. Not that it is mentioned directly in the tale itself but, without wishing to seem to give spoilers, if the main character had been able to read and write, she could have checked the truth of what she had been told by those who ultimately proved unworthy of her trust. “How?” was the question that story left me with: how could people do that, and how many times did it happen? It truly is the kind of story which easily slips from history because these days we wonder firstly how someone could think it is an acceptable way to behave, and secondly, how did they think they would get away with it? The ease with which the deed is done, and the manner in which those in authority accept the villain’s explanation and plea for assistance, are a stark reminder that there is no level of power at which we should accept someone who does not consider the rights and concerns of all parties affected by their decision.

“Over the Hills and Far Away” by Mary Webb is, I felt, as close as this anthology gets to a fairy tale. It is a gentle insight into a life unlikely to be experienced in 21st century Wales and, whilst my modern sensibilities remain somewhat horrified at Margaret Mahuntleth’s lack of agency, I did very much feel she had received a “happy ever after”. One particular detail in this story leapt out at me, and I feel like shouting it everywhere in defiance of the messages given by mainstream media about body ideals (and women’s bodies in particular). Margaret is a chair mender, and in the few pages of her tale, quite a large (but not overwhelming) amount of detail is given about the intricacies of this craft, including:

For dances Margaret also made them strong. knowing that in the intervals young women of some twelve stone would subside upon the knees of stalwarts rising fifteen stone.

As someone who has internalised the message that a woman’s weight should be in single figures when measured in stones (1 st = 14 lb), that small detail really hit home about how unaccepting and alienating our society is.

As a final note, because I’ve been rambling for ages and only discussed two out of the twenty stories in this wonderful anthology, here are two of the most exquisite turns of phrase I’ve ever read:

His lean, wiry frame was clad in the wreck of a tweed jacket

– “The Poacher” by Eiluned Lewis

The valley had life as a wound has microbes

– “A View Across the Valley” by Dilys Rowe

I would very much recommend this anthology to anyone wishing to better understand history, to gain a different perspective on events, or just to read some damn fine writing! I will, however, give one warning, and that is that several of the tales contain written dialect. Personally, whilst I found it slowed my reading down, I did rather revel in all those dropped ‘g’s and suchlike. There is a comfort and a power in seeing the way one speaks recorded in print. 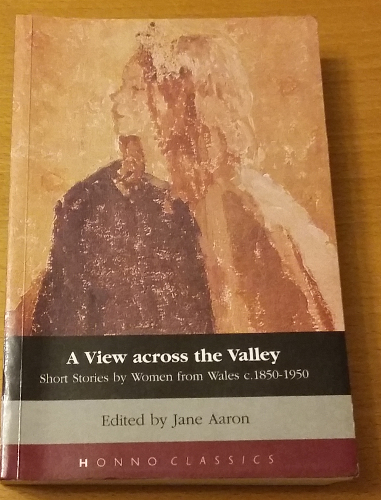