…and I’m back with more story. Apologies for the wait, we’ve had issues with my laptop refusing to connect to the network or internet… seems to be sorted now, but has resulted in a delay of a month before I could post this next bit of the serialised story I’ve been writing for our village newsletter.

Part 1 and part 2 are already posted on this site, so here is part 3:

Tales from the Chicken House: The Corn Conspiracy

Miss Q, snoozing peacefully on a branch in the chicken run, was woken by excited clucking and fluttering below her. With an inward sigh over the folly of her flock-mates, she lifted her head out from under her wing just as the last hen flew out of the open door to the garden. She glanced up at the human who stood watching her, clucked her thanks, and hopped off the branch and out of the run at a dignified pace. The human burbled something in its odd language and walked away to the human-house at the end of the garden. Miss Q pecked at some fresh green grass as she considered her options.

Somewhere, hidden from view by one of the fenced-off areas of tasty greens, Blackadder crowed and chattered excitedly about finding some red fruit. Miss Q made a mental note of where he was, so that she could investigate later, then hopped away in the opposite direction to have a dust bath under the hedge.

Her solitude was short-lived. Mrs B bustled under the hedge, fluffing her feathers as she settled down and took over most of the dust bath. She clucked happily and told Miss Q all about the tasty treats Blackadder had found in the short time since they’d been released from their run.

“Of course,” Mrs B concluded, “what I’d really like is some corn, but I suppose strawberries will do for now.” 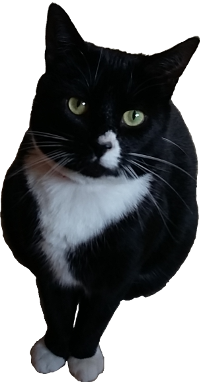 “I know where the corn is.”

Both hens squawked and flapped in surprise at the unexpected voice intruding into Mrs B’s monologue. Socks the cat chuckled, then slunk under the hedge to settle at the edge of their dust bath.

Socks sat, tail curled round her hindquarters, and cleaned her face while she watched the two hens compose themselves. Once satisfied with her appearance, she placed her forepaw a whisker’s breadth from Miss Q’s tail feathers, and repeated herself. “I know where the humans keep your corn. If you’re interested, that is?”