As mentioned previously, I’m writing a serialised story for our village newsletter. You can find part 1 here (I’ll wait for you to come back)… Now! On to part 2, which appeared in July’s edition of the newsletter…

Tales from the Chicken House: The Corn Conspiracy

Mrs B was just settling down for an afternoon snooze inside the chicken house when Blackadder’s loud squawk interrupted her plans.

“Where’s the corn?” Blackadder yelled at the hens, “Who’s eaten all the corn?”

Miss Q said something but it was too quiet for Mrs B to hear, and that annoyed her. If her afternoon snooze was going to be interrupted by the rest of the flock, she wanted to at least listen in on the conversation.

Feeling distinctly ruffled despite her recent preen, Mrs B leapt down from the perch and scampered back outside.

“They haven’t given us any corn, Blackadder!” she reminded him.

“Honestly!” Miss Q squawked at her, “I just got him to calm down, and now you’re winding him up again?”

“No corn?” asked Blackadder, “What do you mean, no corn? Miss Q just told me we all ate it!”

“I’ve not had corn for weeks!” said Blackadder, throwing back his head to crow, “Give me some corn!”

Miss Q pecked at them both. “Blackadder, shut up. You’re being all over-dramatic again. It has NOT been weeks, only two days. And Mrs B! Please stop complaining! We’ve got pellets, and water. The humans even brought us some green stuff earlier, if you remember, and we got mealworms last night.”

“But we want corn!” Mrs B and Blackadder protested in unison.

“Well, I’m sure we will have some soon enough,” Miss Q said, hopping up onto a branch and settling down for an afternoon nap, “Maybe they’re waiting for you two to stop being so noisy? Now. If you could refrain from shouting for a few minutes, some of us would like a rest.” She tucked her head very deliberately under her wing and ignored the other chickens until they wandered off, muttering theories and plans to each other. 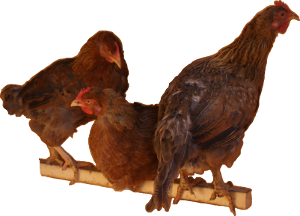